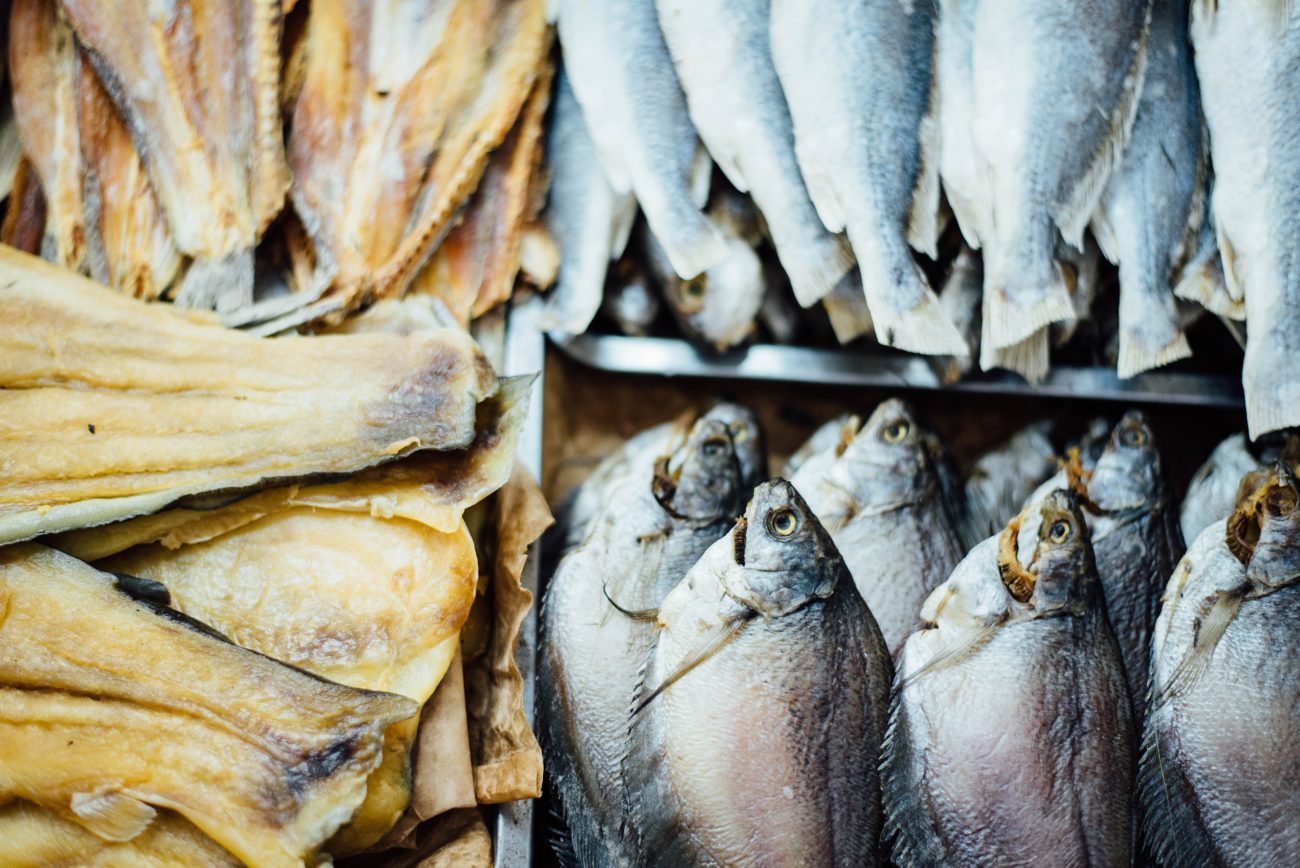 I oversleep, miss breakfast, my friends and the bus to Braga. The next one goes in an hour. There’s an unimpressive-looking restaurant across the road and I’m starving. Their dish of the day is bacalhau. Salted cod.

Of course it is.

This dried fish speciality is ubiquitous in Porto for obvious historical reasons. What better way for fishermen to preserve their catch for months at a time than drying and salting it? Little shops have huge slabs of it hanging from walls and doorways, so its pungent aroma not so much tickles but assaults passers-by. I’ve eaten it fried, barbecued, as fishcakes and even raw with onion and garlic.

Bacalhau and I are acquainted, but I would not call us friends.

The waitress delivers my Bacalhau à Zé do Pipo, a cod steak fried with onions and garlic topped with mayonnaise sitting in a circle of mashed potato, crowned with black olives, oven-baked till golden.

It is the most delicious thing I have ever eaten. Over the years, I have tried to recreate that flavour experience and never come close.

We all encounter these moments of discovery and delight, often in new environments, only to find they disappoint the second time around. How many of us have a bottle of tequila, limoncello or rum gathering dust in your drinks cabinet because of that night in that bar with those people?

Ask yourself. What do I know about taste? Which parts of the body ascertain flavour? Where does our concept of what is good and bad food come from? Why does orange juice seem foul after brushing your teeth? How many distinct tastes can our tongue discern? Why is the product Marmite now an adjective to indicate strong reactions?

The scientific discipline which explores these various effects on our perception of flavour is called, delightfully, gastrophysics. Having researched this relatively new branch of investigation in order to write a crime novel about culinary espionage, I would sum up my thinking as follows: what we describe as ‘flavour’ is the brain’s reaction to a whole spectrum of stimuli. Or to put more formally: flavour is a “complex combination of the olfactory, gustatory and trigeminal sensations perceived during tasting”.

Tastes, on the other hand, are more easily defined. Science widely acknowledges five distinct tastes people can distinguish between and have a preference for: salty, sweet, sour, bitter and umami. (The latter answers the Marmite question – it’s an umami bomb.)

We all know the senses of smell and taste are interconnected. To a point. Here I must pause to credit my step-dad’s caveat, whose observation few would refute: “You can’t taste a fart, love.”

Nevertheless, smell and taste work together. Without the former, the latter is less accurate. Naturally. How else would our forebears decide whether something was edible or not? Oddly, the reverse is not true. When identifying perfume essences, tasting them doesn’t help. It makes me wonder which brave soul took the first step of biting into the evil-smelling durian fruit and revealed the sweetness within. Or risked such cheeses as a ripe Camembert or Stinking Bishop.

Gastrophysicists have gone much further and proven that flavour is connected to all our senses: sight, touch and even sound. My philosophy is that also expectation, mood, bodily requirements, language and environment all come to bear on what we experience as a taste sensation. Little wonder entire corporations are dedicated to creating and marketing flavour, while some menus merit a prize for literature.

Take sight. This has two elements. What we see on the plate/packaging (vision) and how it is described (language). Colours matter to that ancestral part of our brains which assesses what we might consume as ripe, raw, toxic or nutritious. Certain combinations reassure us as healthy or ideally matched – green and red in salads, honey-gold in baked goods and pinky brown of cooked meat. Subliminally, a red and white checked tablecloth and candle dripping down a bottle of Ruffino represents authentic Italian cuisine. Whereas in Greece, if the tablecloths aren’t blue and white, something feels off.

The contemporary brain is equally susceptible to meaningless phrases such as ‘farm fresh’, ‘hand made’ and ‘locally sourced’. In a previous job, I spent many months in Brussels, working long hours and returning to my hotel to eat and sleep. The menu was limited but even so, I could never bring myself to eat the crevettes grises (grey prawns).

As smell is to taste, texture is aligned to our sense of sound. Crunchy, brittle, crispy, fizzy, creamy, sizzling as food descriptions express the mouthfeel but also what happens in the ears. Charles Spence, whose research on the influence of sound on flavour is a revelation, quotes an experiment on how participants reacted to the quality of coffee based on the sound of the coffee machine. The coffee was exactly the same, but the noisier the machine, the better participants judged the resulting beverage to be.

In this global world of experimentation and exploration, there are many other influences. Why does that Piña Colada taste so perfect on honeymoon in an Acapulco beach bar? Perhaps because all the elements surrounding the cocktail – mood, expectation, appropriateness and environment – work in harmony to make the experience an endorphin rush we are unlikely to forget.

Not only that, but your preference or loathing for bird’s-eye chilli peppers, wasabi, natural yoghurt or Vegemite may have a great deal to do with your cultural background and childhood diet. After 18 years together, I still shake my head at my Swiss husband combining cheese and jam at breakfast.

Taste or flavour is a complex sense that most of us vastly underestimate. To get a highly readable overview of the issue, I strongly recommend Flavor by Bob Holmes. The book is well-researched and fascinating, yet written with an accessible, warm tone. I was not in the least surprised to see Bill Bryson had provided the cover quote.

Our senses are inextricably intertwined and why should they be otherwise? Whatever we consume is evaluated in relation to our well-being, so we use everything in our power to determine its worth.

Flavour doesn’t happen in the mouth, it happens in the mind.

Honey Trap, a novel of culinary espionage set in the Italian city of Naples, is released on 24 June 2019. You can order it HERE.

All images courtesy of Unsplash