A selection of titles on international women in translation or in English.

Quite apart from the variety of voices, these books allow us an insight into the experiences of women in places we know nothing of and might never visit. These books open a door. We may not always like what we see but we come away with a greater understanding and appreciation of what it is (and was) to be a woman in another part of the world.

Reviews and comments by JJ Marsh and Catriona Troth for Bookmuse.

Beautiful, magical, with a subtle evocation of Sardinia’s island culture in a period gone by. For a mother with too many daughters, it’s a neat solution to make a bargain with a sterile woman. A better life for the girl and for the lonely woman.
So Maria is a fill’e anima – a soul child.
Bonaria is the accabadora, the opposite to a midwife. She assists souls on their way out.

The Bastard of Istanbul by Elif Shafak

Shafak wrote The Bastard of Istanbul in English, but the book plays with Turkish and Armenian phrases, sayings and stories, using language to immerse the reader effortlessly in a different culture.

She constantly challenges the assumptions of both women, showing at the same time how deeply divided the two cultures are – and how closely intertwined.

Half of a Yellow Sun by Chimamanda Ngozi Adichie

A restrained and beautiful writer, Adichie never shows off, telling her story in understated crisp prose. The title of the book refers to the symbol on the Biafran flag, intended to represent the dawn of a new nation. Despite the tragic death of the Biafran dream, the horrors and the heartbreak, Half of a Yellow Sun is uplifting; more sunrise than sunset.

The Break by Katherena Vermette

The Break is an area of rough ground on the edge of an unnamed city between the Canadian Shield at the Prairies. It abuts a neighbourhood home to many Métis and ‘status Indians,’ written off by the local police as ‘nates’ or ‘May-tee’.

A tender exploration of the impact of sexual assault on an extended family, and of the resilience of indigenous women. A story that will stay with you long after you have closed the final page.

Dalila’s story both heals your heart and breaks it. People are kind, cruel, thoughtful, caring, careless and ignorant. The small gestures and daily routines give us flashes of optimism. One woman’s journey as a refugee makes us believe in, or at least hope for, the human race.

A novel to help us understand the global by engaging with the personal, this book leaves you profoundly shaken. It also offers a real insight into a situation reported with more hysteria than humanity.

Where the River Parts by Radhika Swarup

Like Chimamanda Ngozi Adichie’s Half of a Yellow Sun, Where the River Parts takes us inside a conflict that most of us know only from newspaper headlines and historical reports.
And like Kamila Shamshie’s Burnt Shadows, it spans half a century and two continents.

The novel opens in the days before Indian Independence in 1947, when the country is about to be divided into Muslim Pakistan and Hindu India. Mistrust is in the air and a season of madness is about to sweep across the country.

When Broken Glass Floats by Chanrithy Him

Growing up under the Khmer Rouge in 1970s’ Cambodia, Him tells her story from the inside. Seen through a child’s eyes, conditioned to good manners and respect, to be thrown into a feral environment. Survival, food and reducing empathy to its narrowest circles is at the heart of this moving and powerful narrative.
This is an important book, the human face of a political tragedy, and a sobering read for enthusiasts of dystopian YA.

Sophia Khan is Not Obliged by Ayisha Malik 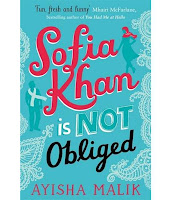 It will also make you laugh out loud on almost every page. Sofia and her friends have to deal with things Bridget Jones could never have imagined – from Muslim speed dating, to deciding whether it’s okay to become a polygamous second wife. As for emotional blackmail, Muslim aunties take it to new heights.

But Sofia Khan has something BJD never quite achieved – a sense of real heart. Sophia can be clumsy, obtuse, grumpy, even downright rude at times. But she is utterly lovable in her vulnerability, and the warmth of affection for her friends and her bickering family leaps off the page. I cried unashamedly through much of the last fifty pages.